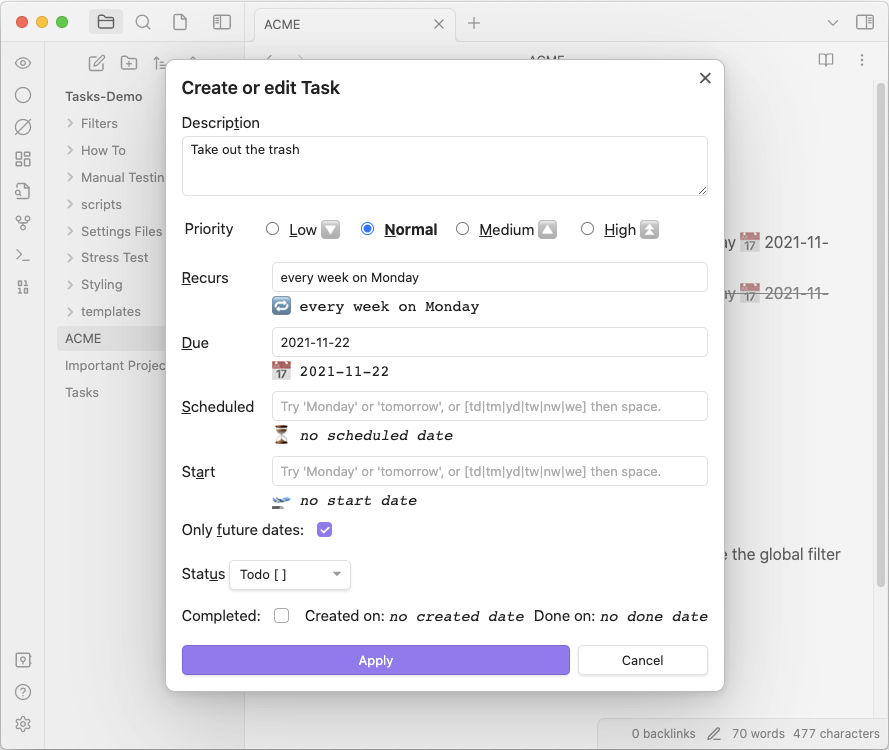 The Tasks: Create or edit command helps you when adding or editing a task.

Use the command ‘Tasks: Create or edit task’ to launch the modal.

All the fields of the form have “access keys”, that is, keyboard shortcuts. The access keys are displayed as the underlined letters in the labels.

If the access keys (keyboard shortcuts) for any field conflicts with system keyboard shortcuts or interferes with assistive technology functionality that is important for you, you may want to turn them off in the Tasks plugin’s settings:

This setting takes immediate effect, and does not require restarting of Obsidian.

This is the text describing your task.

If you have a global filter enabled, the dialog takes care of adding it automatically.

Here you can make the task recur, so that when it is marked as done, a new task is created, with newer dates.

Here you can optionally give the task due, scheduled and start dates.

There is a lot of flexibility here. For example:

Note that relative dates will be always interpreted as being in the future, because that is usually what you want. You can change this behavior by unchecking “Only future dates” if you want to enter an overdue task or experiment with the way how relative dates in the past would be interpreted in queries.

Only future dates was introduced in Tasks 1.15.0.

The modal also has a few abbreviations of its own, to speed up entering of common values in the date fields.

Type in the abbreviation and then a space character, and the whole word will be entered for you.

Status and Done on

These values cannot currently be edited in this modal.

To close the modal and save your edits, do one of:

To close the modal and cancel your edits, do one of:

Need to scroll on phone screens

On phone screens the ‘Create or edit Task’ Modal may be too tall to fit on the screen. It does support scrolling, and on Android, the scrollbar is visible.

Unfortunately iPhones don’t display the scrollbar until you actually start scrolling. Tap on the screen and drag down, and you will see a scrollbar appear temporarily. More importantly, the scrolling does then work fine.

We are tracking the iPhone scrollbar issue in issue #1238.